It is hard to go into a movie theater when a film has been hyped up to an great heights by critics. The reviews for Gravity were promising a once in a lifetime experience, and that is hard to live up to. Luckily for me, Gravity not only met my expectations, but blew them completely out of the water, reaching cinematic heights of epic proportions.

The story of Gravity is not incredibly complicated. While working on a space station a cocky, veteran astronaut Matt Kowalski and an unsure medical engineer Ryan Stone (George Clooney and Sandra Bullock) are disconnect from their destroyed spaceship, when debris from an exploded Soviet satellite hits them, knocking them into space. Eventually, they are able to latch onto each other and a jet pack gets them to the International Space Station. From there is a fight to see if either of them are going to make it back to Earth in the ultimate struggle for survival. 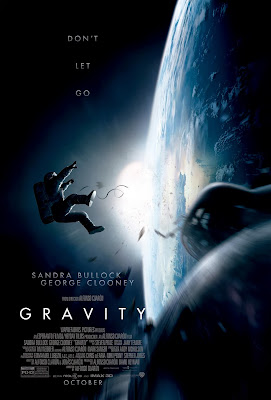 While on paper, the story sounds like a straightforward survival story, what plays on screen is far more than that. First and foremost, Gravity is a visual spectacle, groundbreaking in its technological scope, and a feast for the eyes. Over the last couple of years, we have seen the technology improve and be implemented in award winning films, starting with Avatar, through Inception, then Hugo, and finally, last year's Life of Pi. This time around, Alfonso Cuaron and his technical team, including the fantastic cinematographer Emmauel Lubezki, create a scenerio on screen that is unlike anything else we have ever seen. From the first shot to the final, it is a beautifully rendered piece, that is so incredibly realistic, you would have thought they actually launched up into the heavens to shoot the film. The sound quality of the film is also amazing. For every loud and intricate moment, such as the scenes of explosion, there are impeccably moving quiet moments, pulled together well by the sound team, and by Steven Price's masterful score.

It is also a masterclass thriller, that keeps you biting your nails all the way through. It is tense, taut, will raise your blood pressure, and even in its quiet moments, you know that potential danger is lurking all around, so the tension never lets up. Cuaron and his editors deserve all the credit for the masterful direction the film takes, which includes almost perfect timing. In particular the moments that build up with such intensity, and then end with a moment of dead silence. It will leave you stunned.

None of the above surprised me. I knew that at the least, it would be fun to look at, and a decent thriller. What I was surprised about is how hard it hit me on a human and emotional level. This film leaves you breathless, and it is not just because of the stunning effects. Gravity also reaches out for your heartstrings. The emotional moments are subtle, and short-lived. A funny quip or story from Clooney's cocky, and comfortable Matt, or the simple look of sheer horror on Sandra Bullock's face, or the sound of a dog barking or a child crying, all come and go with ease, but in the end they add up to something profoundly emotional and effective. That is because Gravity reaches into our souls and plays out on screen some of our worst fears. It also shows how the human spirit can fight for its survival. The transformation of our main protagonist Ryan from the unsure and frightened medical engineer, to the strong and committed hero is an amazing journey. A lot of credit goes to the Cuaron's for their wonderfully tense, taught, yet human script. But most of the credit goes to the incredible Sandra Bullock. I have always liked Bullock, and felt that a lot of the time she gets shafted in terms of the overall quality of her movies. But after seeing Gravity, I am completely sold on her talent. She doesn't have an incredible amount of dialogue, yet still manages to capture the fear and eventually the fight that her character must encounter. It is a breathtaking performance that is deserving of a second Academy Award. Clooney most plays himself, but his carefree and funny Matt is a wonderful foil for Ryan, and he also provides probably one of the most intimate and best scenes of the film.

In the end, Gravity goes so far beyond just being a film. It is first and foremost an experience. You are transported to a world that is frightful and beautiful all at the same time, and just when you think that you have officially left the gravity-filled world, you are reminded that at its heart Gravity is a strong of human struggle. I can honestly say that I have never seen anything quiet like Gravity on screen before, and I doubt that any film this year will be able to top the cinematic heights reached by this incredible piece of art.