Your Highness tells the story of two princes: Thadeous and Fabious. Fabious (James Franco) is the golden first child of a king, whose heroics and conquerings make his famous throughout the kingdom. Then there is Thadeous (Danny McBride), whose sexual exploitations, laziness, and failures make him pale in comparison to his statuesque brother. After Fabious returns for a conquering with his new love Belladonna (Zooey Deschanel), the evil wizard who had kept her under lock, Leezar (Justin Theroux) comes to steal her in order to fulfill an ancient prophecy. The King then declares that even the lazy, drunk, and always high Thadeous must go along with his brother to rescue Belladonna before the two moons meet, and Leezar's evil prophecy is fulfilled. Along the way they meet a warrior who saves their lives and joins their mission, Isabel (Natalie Portman), face evil (and sometimes perveted) magical creatures, dangers like no other, and betrayal. 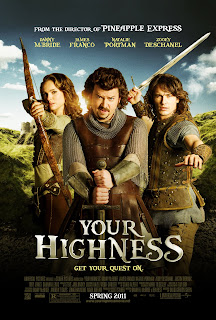 Your Highness has tons of potential, especially since it is from the same people that made Pineapple Express. Despite that, it is only sporadically funny, going through many parts that are completely devoid of laughs, and even the cool special effects cannot make up for a film that seems to be just going through the motions in the hopes that a few stoners will think its the funniest thing they ever saw.
There are some bright moments, especially Danny McBride, whose dry humor was probably the only thing that made me laugh throughout the entire thing, and Natalie Portman's straight laced deliverly was actually welcomed. James Franco needed to really impress me, especially after his despicable lazy Oscar hosting, and I found him completely annoying. His British accent was terrible (which may have served a purpose, but it made him look like an amateur actor who was trying to hard), and his stupid "I am a stoner" grin and lazy delivery slovenly trudged along throughout the entire film with no reprieve. He needs to step his game up to earn my respect again.
Furthermore, while the story line is a classic adventure tail, by the end it seems to be running out of steam, and if the final scene (which I won't divulge) is the indication of a sequel, I think I will convienently have to miss it.
Overall, while Your Highness has some decent moments, it is a chaotic mess that never even gets close to the comedic brilliance of Pineapple Express, despite its best intentions. It is not neccessarily a bad film (after Sucker Punch, this one seems Oscar worthy), but you can tell that it was poorly made, and hoping that pure star power would help overcome its glaring acting and writing flaws. Unfortunately, that hopeful prophecy never came true.