When Sidney Prescott (Neve Campbell), the infamous surivor of the Woodsboro Massacres (three times I might add), returns on the anniversary of the murders to promote her new book about overcoming victimization and rising to a new life, it turns out that someone is not ready for her to move on. Upon her return, we get to see our favorite characters Dewey (David Arquette) and Gail (Courtney Cox), who are ironically married, and Gail in particular, is looking for a new project after her successful journalism career has been put on hold for domestic life. However, when the murders start again, this time targeting the friends of Sidney's cousin Jill (Emma Roberts), and her aunt (Mary McDonnell), Sidney must once again overcome Ghostface, and stop the murders before they get to her.

From its first scene, the film, within the film, within the film, to its last shocking frame, Scream 4 still provides
all the thrills, laughs, and twists that made the franchise such a hit in the first place. It is energetic, mocking, sharp, and a hell of a lot of fun to watch. This is thanks to the talents of Kevin Williamson and Wes Craven, who recognized the mistakes of the previous entry, and mostly succeed in bringing back the movie magic that made the first two such cult classics. 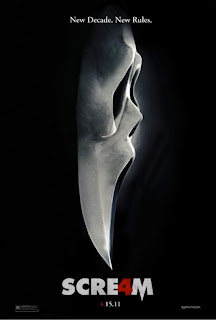 The cameos, along with the main characters, are sharp, particuarly some of the kids, my personal favorite being Hayden Panettierre, who proves that her career could be in snarky comedys, as she nails the sarcasm and sexiness of her character Kirby. Furthermore, this may be my nostalgia kicking in, but I have missed our main cast of characters. Neve Campbell's concerned face, Courtney Cox's ambition, and David Arquette's cluelessness. None of them are the greatest actors in the world by any means (Although Cox will always have a place in my heart for Monica), but they know their characters, and the ease of which we slip back into their story makes us feel comfortable, despite the bloodshed and twisted plot.
The biggest problem with Scream 4 isn't that many of its characters are not developed, or that the end has just one too many twists and potential stopping points which made the whole audience groaned, because that was exactly was Craven and Williamson intended. They were not trying to make some valuable piece of art, just a hell of a good time with some old friends (and some new ones), that would make audiences laugh, jump, and cheer, all of which were true of the film. No, the problem is that I am concerned that the franchise will continue, that there will be more killings, and more laughs, and more and more and more. This was a nice reboot, and a much better way to end the series than the dreadful Scream 3, but my hope is that this is it, the true finale, a nice reminder of a wonderful horror franchise. Because in Scream 4, the fatigue seems to be setting in, as many of the old tricks are employed for the viewers nostalgia, despite the promise of "New Decade, New Rules". I enjoyed the film, embraced its cheesiness, its flaws, and its rollercoaster ride. But I hope that ride has ended for good.