In a heartwarming tale about honesty, struggle, perserverance, and family, Paul Giamatti plays Mike, a struggling lawyer who takes on care of a client in order to receive a monthly commission that would help keep his practice and his family afloat. Meanwhile, as his practice struggles, so does the local highschool wrestling team that he coaches, as they haven't won a match the whole year. However, when Mike declares he will take care of his client Leo, he doesn't bother to tell his loving wife (a wonderful Amy Ryan), and then breaks his promise to keep him home by lying to him and putting him in a retirement home. When Leo's grandson Kyle (Alex Shaffer) shows up on Leo's doorstep, Mike must take the kid in for a couple of days. When a couple of days turns into a longer time, as his druggie mother is still in rehab, Mike discovers that Kyle was one of the best wrestler's in his home state of Ohio (the movie takes place in New Jersey), and with Mike's encouragement, he regains his confidence to wrestle again and uplift a dying team. However, when Kyle's mother comes back to get him, Mike must confront his lie, as well as protect a kid who has become like a son to him. 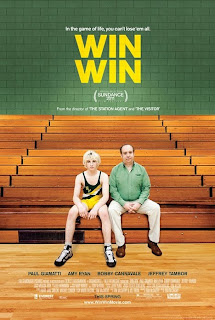 In many ways, Win Win is a conventional tale about family values, the importance of paying it forward, never underestimating the underdog, and learning that lying gets you no where in life. Yet as you watch it, it is its conventionality, along with some more deeper struggles of anxiety and love, that make Thomas McCarthy's Win Win such a pleasure to watch. It never panders to its audience, and in many ways avoids the annoying cliches that have become so prevalent in other films of similar magnitude. This is especially true of the ending, which is not cheesy, but instead quietly poignant.
What really makes this film pop is the collective work of its incredible cast, that truly brings a wonderful combination of heart, humor, and talent to McCarthy's script. Paul Giamatti may keep playing similar, down-on-his-luck characters, but while every one of them has his signature style, he also knows that each character is different and attacks them with that in mind, and his portrayal of Mike's struggle is nothing short of amazing. Although I don't know if anyone is surprised he pulled it off. But Giamatti is not alone, as his cast of supporting characters pull their weight. Amy Ryan is tough, yet loving as Mike's wife Jackie, Bobby Cannavale is absolutely hilarious as Mike's friend Terry, Jeffrey Tambor, whose role is slight, still manages to make his mark, and as Kyle's mom Melaine Lynskey proves that she deserves better and bigger roles in years to come. Even the young Alex Shaffer holds his own against his more experienced co-stars, and brings emotion and heart to his character.
However, the film is not devoid of flaws, particularly in the second half, where it seems to drag a little bit, and the script gets a little disjointed. Despite that, I can't help but think that that is exactly what McCarthy intended, as the characters get a little haywire, so does its script. Maybe that was the point, that life is messy sometimes, and that in the end not every loose end is tied up. If that is the case, the McCarthy has proved himself to be a true master of the human experience, and has succeeded bringing a touch of warmth and realism to an uplifting tale about underdogs who rise to their full potential. Hopefully this wonderful film will be showing in a theater near you. If so, find your way to the theater. I promise it will be worth your time.
Grade: A-
Oscar Potential: I would love to say that Giamatti, Ryan, Cannavale, Shaffer, and Lynskey all had enough buzz to last all year, but it will probably end up being just Giamatti that has a real shot at, at least a Golden Globe nod, maybe more. The script by McCarthy is definitely a contender for Original Screenplay. My only concern is that it is so hard for a comedy (more like a dramedy, but you get the idea) with a small budget, and an early release date to survive the long and strenuous Oscar season. I hope this underdog tale, like its characters, can rise above its obstacles and stay in the race.
Posted by Andrew at 12:22 AM