When Cassie (Jennifer Aniston) decides she wants to have a baby through artificial insemination, her best friend Wally, in his normal neurotic way is against it. When Cassie goes ahead and has a party to go through the act, apparently with a turkey baster, Wally gets slizzard and accidently spills out the sperm of Cassie's donor (Patrick Wilson), he decides to replace it with his own. Flash to seven years later, and Cassie has returned to New York with her kid Sebastian and after spending time with him, Wally begins to piece together the events of that fateful night only to discover that Sebastian is in fact his son, and that he must tell Cassie before she marries Roland (the donor), and he loses his son and the love of his life forever. 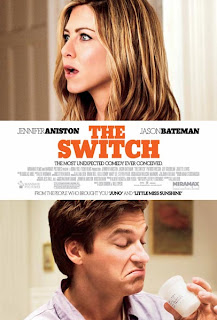 The Switch, starring Jason Bateman and Jennifer Aniston follows many of the standard rom-com parts of the formula, but still manages to be a delightful little movie that is both warm and funny. What helps it rise above the normal romantic chatter is its actors who handle a less-than-stellar script with ease, allowing for it to acutally blossom, and for us to actually care about what we are watching. The little boy who plays Sebastian, Thomas Robinson, is absolutely adorable, and really has some incredible chemistry with Bateman and Aniston. Jeff Goldblum and Juliette Lewis are hilarious and scene-stealers as the two sidekicks, but also do a great job at not being too corny. Jennifer Aniston does a pretty good job, showing both great comedic timing and emotional depth, while maintaining a certain level of class in every scene. But the real force that carries the weight of the movie is the always fantastic Jason Bateman, whose hilarious, neurotic Wally is a wonderfully flawed character, whose personality is both annoying, yet sort of lovable at the same time.
Where the movie falls flat is in its stories, the writers did nothing great to help their characters develop chemistry, which is a testament to the ability of these actors that we actually felt something between them. More importantly, the premise of the whole story is just too contrived, too shaky, and too unrealistic, because although we are laughing at the insemination party, we all are also thinking in the back of our minds at how truly ridiculous all of this is. The best romantic movies are the ones that are not forced, and this one is definitely forced on to us in a way that can sometimes feel stiff.
Despite its flaws, The Switch is a warm and funny movie that shows us the difficulties of parenthood, the twists and turns of modern-day science and medicine, and the bond that develops between people who finally realize their true feelings. While its no modern masterpiece, The Switch is a nice end-of-summer movie that makes you feel good, allows you to sit back and relax and enjoy some nice performances.
Oscar Potential: Absolutely none. Bateman might get some Golden Globe love if the competition is weak, but other than that it should just enjoy some hopefully decent box office.