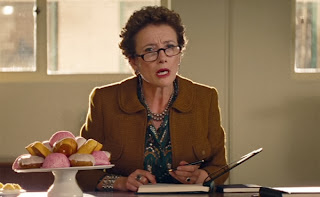 Commentary - Still six for five slots, and probably will be until the nomination morning. I know that everyone is predicting Judi Dench, but to me, while Philomena is playing relatively well, she still feels like a placeholder. If Amy Adams nails her role in American Hustle, and the film ends up being a big Oscar hit (which it looks like it will), I think there may be more backing for her nomination. But beyond this semi-battle, I think the other four are locked and loaded. Blanchett and Bullock remain the frontrunners for their dynamic performances, and Meryl Streep chewing scenery like she does seems like a safe bet. Emma Thompson's character is apparently not that likeable through most of the film, but word at the Governor's Awards was that Academy members were in love with Saving Mr. Banks, and Thompson is a former winner in this category, so I expect her to get in. of course on the outside are some indie and comedy favorites like Louis-Dreyfus, Larson, Gerwig, Delpy, and Exarhopoulos, but I think that Indie Spirits and maybe Golden Globes will have to do. The critics awards that start next week will start to determine how this and every race will turn out.