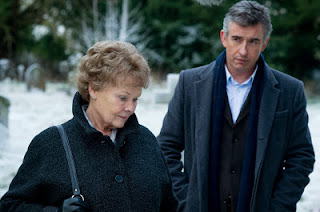 Commentary - As I said before, this category is much weaker, in terms of depth, this year compared to its original screenplay counterpart. It looks like now there are six films fighting for five slots. The first is of course 12 Years a Slave, which still remains the frontrunner across the board. Then there is Captain Phillips, which will cross the $100 million mark at the box office soon, and once again, remains a formidable Oscar challenger.  Those two seem like locks at this point, and probably the frontrunners. We have yet to see The Wolf of Wall Street, but in this weaker category, a solid Scorsese effort will be an easy name to check off. The last two slots are a bit tricky. Before Midnight should be in the mix, and its predecessor was nominated, but it needs to get some precursors. Blockbusters like The Secret Life of Walter Mitty, Monsters University, and The Hobbit, could manage to snag some votes. Then there are the underground indies like Blue is the Warmest Color and Short Term 12, who need solid campaigns to gain traction. Then there is The Book Thief which is being pushed as an awards contender, despite reviews to the contrary. Of course do not discount a Holocaust movie at the Oscars. But I think that ahead of all of them currently are two films that have big stars and decent buzz. Philomena is premeiring to solid reviews, and the Brits don't have many big contenders to push, so this could be a rallying point. The final slot right now goes to August: Osage County. I know that the reviews are mixed, and that it may just be the acting branch that rewards it. But Tracey Letts is a big name, and in a year where there are not enough big contenders in this category, don't discount a Pulitzer Prize winner.
Posted by Andrew at 9:40 PM