Other Contenders - Epic, A Letter to Momo, Turbo, O Apostolo, Despicable Me 2, Cloudy with a Chance of Meatballs 2, The Fake, Planes, The Legend of Sarila, Rio: 2096 A Story of Love and Fury, Khumba,  Puella Magi Madoka Magica The Movie - Rebellion. 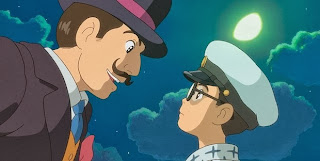 Commentary - So there are enough contenders this year for five nominees, but I am starting to wonder whether there will be five films that score high enough to even make the cut. Furthermore, by opening up the voting process more, I wonder if studio films will start to dominate, and block out the more daring choices that the Animation branch makes, particularly with their GKids selections over the years. After initial reviews, it looks like Frozen could finally be Disney's ticket, as it is sure to make a lot of box office over the Thanksgiving weekend. It could finally beat the lesser Pixar effort of Monsters' University, and at least make some hay in the Original Song category as well. Speaking of Pixar, I am pretty sure that Monster's University will continue to play into this category, and don't discount it. It was actually a pretty good movie, and it was very popular and successful for the studio. The other film that seems like a sure bet is The Wind Rises. If this is in fact Hayao Miyazaki's last film, then I would think that animators would be glad to take this one last chance to add to his awards haul (which already includes an Oscar), with a final nomination. The film will probably be a critical favorite, but in a Academy-wide vote, I doubt it can beat Disney and Pixar. So that leaves two potential slots (if they go that far). I still think that GKids can grab a slot, especially in such a weak year as this. Their best shot is probably Ernest and Celestine, and a little bit of campaigning, and maybe some critical response will help it push through its indie and foreign barriers. In the final slot, there are two studio efforts, that both did well and got mildly decent reviews, but neither has the heat of its major competitors. Of the two I am going with The Croods, but Epic is not far behind (it is well-animated, so that could sway votes), and both could make it in if the smaller efforts get pushed out.
Posted by Andrew at 1:34 PM