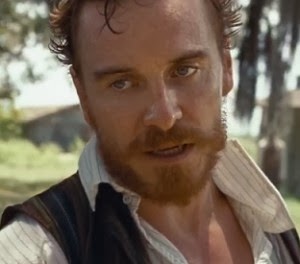 Commentary - This category actually looks to be an exciting one, after the last two years fell completely flat, in my opinion (although I did love the Christopher Plummer win). At the top of the heap is Michael Fassbender. Whether he chooses to campaign or not, his name will be thrown around a lot, and the film's coattails will be enough for a nomination. Winning may be more difficult, if he is not willing to show face. He has to knock it out of the park early, like Monique did in 2009, or he may be beaten at the finish line. Right now it looks like two guys are the ones to do it. First is Tom Hanks, who is getting rave reviews for Saving Mr. Banks, and plays one of the most famous film icons of all time Walt Disney. If Best Actor has too much competition, this could be a nice way to reward what has been an incredible comeback year for a film legend. The other is Jared Leto. Playing a transgender character doesn't necessarily spell an Oscar win (although I think the nod is in the bag). But he is so transformative, so warm, and such a soulful character in Dallas Buyers Club, that I think he is really a darkhorse here, as is the film as a whole. The last two slots at this point have a lot of room for movement. I have moved James Gandolfini out at the moment, but a campaign could easily put him back into a deserved slot. Not just because of his untimely death or his wonderful career, but also for an incredibly moving and wonderfully funny performance in Enough Said. Also on the outside are two contenders that need some campaigning, but are definitely possibiles. Barkhad Abdi is fantastic in Captain Phillips, but an unknown. John Goodman has been snubbed for years, but his role in Inside Llewyn Davis is small, and I'm still not 100% sold on the film as an Oscar hit. Other contenders include Steve Coogan, Will Forte, Jeremy Renner, George Clooney, Matthew McConaughey in two roles, and Daniel Bruhl, who has suffered from the dying buzz of Rush. So who is in instead? I am sticking with Bradley Cooper, who might be a standout in American Hustle (we will know soon as screenings are starting this weekend for the film). He is also a recent nominee, and once you are on the radar, you tend to benefit from afterglow. Finally, another actor who might see some afterglow is Jonah Hill. We were all shocked by his great performance in Moneyball and subsequent Oscar nomination. But apparently, early word suggests that he is once again a standout in Wolf of Wall Street, which could be a major player this year.