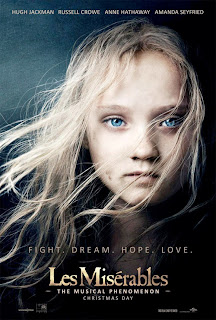 Commentary - We know that five films: The Master, Argo, Silver Linings Playbook, Life of Pi, and Lincoln are all going to be pretty big contenders throughout the rest of the season due to their enthusiastic responses from the festival circuit. Now not all of these make make the final 5-10, but until we see some of the unknown big contenders, they are currently the ones on top. Speaking of those unseen contenders, I still think that Les Miserables, The Hobbit, Django Unchained, and Zero Dark Thirty will play relatively well at the end of this year, and with the Oscar pedigree's involved, I am going to continue to put them on top until told otherwise. And despite the onslaught of some well-reviewed films, I think I am going to hang on to Beasts of the Southern Wild for the moment, because I believe that the critics groups may keep it in the race despite its loss of potential SAG recognition. There are still a lot of films though that are looking to jump into the top ten or so, as new contenders emerge and older ones hang on in a year that could be one of the best in recent years in terms of quality films. Flight just had a great premeire at NYFF (I will do a post later dissecting the reviews), and has jumped to my #11 slot as I think it will be a huge audience and critics hit. Hitchcock is baity material and is also highly anticipated, especially for its performances, but could see Picture in its sights. Summer contenders like TDKR and Moonrise Kingdom still look pretty good months later and if some of these bigger unseen contenders fail, voters will begin to look back to eariler favorites. Also films like Anna Karenina, Amour, Rust & Bone, and Cloud Atlas have all been seen but must overcome stiff competition and their own personal hurdles. Finally, I am looking at the pedigree of Promised Land, and the initially really good reviews of Skyfall as indicators of something bigger for both productions. We'll just have to wait and see...
Posted by Andrew at 2:22 PM