So rumors have been circling that Flight was a return to form for Zemeckis, and that Denzel Washington is Oscar-worthy. Well last night, for the closing of the New York Film Festival, the rumors were confirmed true as Flight has landed with great reviews. I have left it out of the Best Picture top ten, to see how it does with more mainstream critics, plus because it is being called a great character study, I wonder if in the end it will be all about Washington. Anyway, here is a sampling of the positive reviews so far:

Todd McCarthy from The Hollywood Reporter: 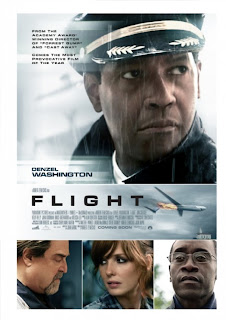 "After 12 years spent mucking about in the motion capture playpen, Robert Zemeckis parachutes back to where he belongs, in big-time, big-star, live-action filmmaking, with Flight. A gritty, full-bodied character study about a man whose most exceptional deed may, ironically, have resulted from his most flagrant flaw, this absorbing drama provides Denzel Washington with one of his meatiest, most complex roles, and he flies with it. World premiering as the closing night attraction at the 50th New York Film Festival, the Paramount release will be warmly welcomed by audiences in search of thoughtful, powerful adult fare upon its Nov. 2 opening."

"Beyond its impressive special effects (a touchstone of Zemeckis' career), "Flight" foregrounds movie stars in firm control of their material, particularly its leading man: Denzel Washington delivers one of his most astute roles in years as Captain Whip Whitaker, the alcoholic pilot of a doomed plane who manages to land it in a spectacular feat before dealing with the investigation into his culpability. Zemeckis' tight direction jives nicely with John Gatis' long-admired screenplay, resulting in a stylishly engaging character study with bold stabs at big ideas."

"Audiences buckle up for one kind of movie but end up strapped in for another in "Flight," director Robert Zemeckis' welcome return to live-action after a dozen years away. Serious-minded drama steers a horrifying nightmare at 20,000 feet into one man's turbulent personal struggle with his drinking problem -- and not in the jokey "Airplane!" sense, either. Denzel Washington is aces as a commercial airline pilot who pulls off a miraculous mid-air stunt while flying with a 0.24 blood alcohol concentration, only to face his demons on the ground. Pic should soar on all platforms -- except in-flight, of course."
Posted by Andrew at 8:40 PM