Whoa!! I did not expect to announce this, but the Academy in a stroke of madness or genius, depending on how you feel about him, Seth McFarlane has been announced as the host of the Academy Awards. Some will be in shock, others will hate him because he is controversial. But I think that with his extensive pop culture knowledge, his great track record of hosting Comedy Central Roasts, and his ability to sing, that he will do a great job, and be incredibly funny. Of course, many have bombed hosting before, so we won't know till its over whether the risk was worth the reward. Here is the Academy's press release from www.oscars.org: 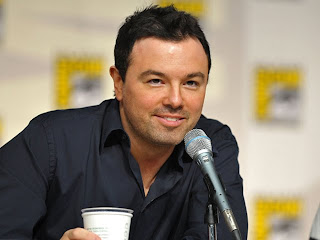 
"We are thrilled to have Seth MacFarlane host the Oscars. His performing skills blend perfectly with our ideas for making the show entertaining and fresh," said Zadan and Meron. "He will be the consummate host, and we are so happy to be working with him."

"It's truly an overwhelming privilege to be asked to host the Oscars," said MacFarlane. "My thoughts upon hearing the news were, one, I will do my utmost to live up to the high standards set forth by my predecessors; and two, I hope they don't find out I hosted the Charlie Sheen Roast."

"Seth is unbelievably talented," said Academy President Hawk Koch. "We couldn't be happier with the creative team we've assembled. With Craig, Neil, and now Seth, we're off to a great start."

MacFarlane made his feature directorial debut this summer with the box office success "Ted. "He also co-wrote and produced the film, and voiced the title character. "Ted" has brought in over $420 million worldwide, making it one of the highest-grossing films of the year.

MacFarlane is the creative force behind the television series "Family Guy" and co-creator of "American Dad!" and "The Cleveland Show. "In September he hosted "Saturday Night Live" for the first time, for the show's 38th season premiere. An accomplished live performer, MacFarlane has played to sold-out audiences at London's Royal Albert Hall and New York's Carnegie Hall.In 2011 he released his debut album, "Music Is Better Than Words," which earned two Grammy® nominations. He also has earned 13 Emmy® nominations and won two for his work on "Family Guy."

Academy Awards for outstanding film achievements of 2012 will be presented on Sunday, February 24, 2013, at the Dolby Theatre™ at Hollywood & Highland Center®. Don Mischer will direct the telecast for the third consecutive time. The Oscar presentation also will be televised live in more than 225 countries worldwide."