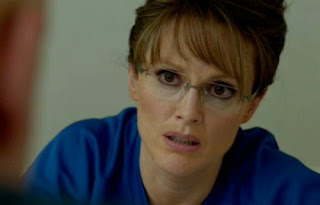 Commentary - Nicole Kidman could get an Emmy for her role in Hemingway and Gelhorn, but my guess is that her former Hours co-star Julianne Moore is going to sail to Emmy gold. She is playing a controversial public figure, Sarah Palin (which won Tina Fey an Emmy as well), and even those that didn't like Game Change were complimentary of her electrifying performance. Plus she is a genuine movie star, and well-liked within the industry. I think she takes the prize easily.
Posted by Andrew at 10:28 PM