Before seeing the film Hope Springs, I had ready two very different reviews regarding its quality. One set of reviews said that it was another schmaltzy romantic comedy heaped with so much sugar that it would make your teeth fall out. The other set of reviews said that it was in fact a surprisingly dramatic affair, sprinkled with comedy, and incredibly honest. After seeing it yesterday, I man happy to say that it is definitely more of the latter, despite a few moments of schmaltzy.

The story revolves around Kay and Arnold, who after 31 years of marriage, have gotten stuck in a deep rut, and have stopped having sex as well as sleeping in the same room. Their gifts have been reduced to household upgrades, and Kay, fed up and depressed with her existence decides to risk everything and save her marriage before its too late. So she pleads with Arnold to follow her to Maine where Dr. Bernie Feld has made a reputation as a successful psychiatrist who specializes in intensive couple's counseling. And this is where most of the film takes place, as Kay and Arnold deal with incredibly tough and awkward counseling session, as well as tough exercises which attempt to break the barriers that have been put up in their marriage. As hurtful truths and important realizations come to the fold, Kay and Arnold must overcome the biggest hurdle in their marriage to find the love and passion they once had, or kindle in themselves that which they never did. 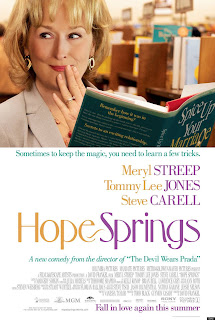 If you were to only go by its trailer, Hope Springs looks like a light romantic comedy, as some reviewers still think it is. But make no mistake, this is not a feel-good comedy. It is an intense and sometimes hard-to-watch drama about the rebuilding of a marriage that is impeccably real, brutally honest, and one of the most refreshing adult dramas to come out in years. That is not to say that there aren't laughs, but they serve more as accents and breaks in the painful sessions, than as huge plot points. But while some people may feel misled or disappointed, I personally found it a refreshing change from a well-worn genre.

It doesn't hurt that you have two of the best actors working today giving top-notch performances. Meryl Streep is excellent as always, and plays Kay with a painful vulnerability which is a drastic change from her Oscar-winning role as Maggie Thatcher, but still manages to pack a punch. But the real revelation here is Tommy Lee Jones. On one end, he plays a cranky accountant, which is an offset of some of his other roles. But when he starts to dive into his marital problems, the combination of pain, anger, and vulnerability that he portrays is quite stunning, and one of his best performances in years. Even if this had been lesser material, these two performances would have made it worthwhile. But combine them with a refreshingly honest portrayal of marriage, and Hope Springs is a winner.

One exception to his otherwise wonderful film experience, was the lack of lines for Elisabeth Shue and Jean Smart, both of whom are talented actors, and both of which are featured in the trailer. They each have about two or three lines, and that's it. Kind of disappointing. The other main issue is the ending. I never doubted that it would wrap up its story nicely. But after such a fresh beginning and middle, the ending felt a little two forced, a little too wrapped-up.

But despite a few flaws, Hope Springs is still a winning film. And while it, as a whole, will probably not be tearing up the awards circuit any time soon, its two leads are definitely in this Oscar race. Furthermore, it is a great end-of-summer movie that has broken up the monotony of loud, action-packed, blockbusters, and proves to be one of the most enlightening adult dramas of the year.