60. Raise the Red Lantern (1991) - In the last couple of years, I have dived into some of the foreign films of the past which made an impact. One of those films was the 1991's Raise the Red Lantern. Set in 1920's China, Yimou Zhang's film tells the story of a woman forced to marry a man who already has three lives. The film, which has an almost silence simplicity on its surface, is an in-depth look at the struggle of women at this time, and continuing struggles that women in China face, as they fight to push themselves ahead, in a sexist world. It also had anti-Communist undertones that remain relevant twenty years later. Most importantly, Raise the Red Lantern is a beatifully shot modern masterpiece that showcases how the art and beauty of film can combine with reserved, yet stunning performances, particularly Gong-Li, and surprisingly deep themes to create an all-around film experience which is entertaining, stunning, and leaves you only wanting more.

59. The Insider (1999) - Michael Mann has shown his knack for potent thrillers, in various subgenres. In 1999, Mann tackled the dirtiness of corporate America in yet another film triumph, The Insider. Part whistle-blowing thriller, part political message about the corruptness of corporate america, in this case the tobacco industry, The Insider is an in-depth, thinking-man's film that provides an interesting and scary expose, while remaining both intelligent, as well as entertaining. It is full of clever, cat-and-mouse dialogue, and never wastes a moment or a frame, all perfectly placed for a specific reason. It doesn't hurt that it has deft pacing, perfectly shot scenes, and some scene-stealing performances from the likes of Al Pacino, Christopher Plummer, and particularly Russell Crowe. It was the 1990's version of All the President' Men, and although some would argue it pales in comparison, I would say it was a nice followup instead.

58. The Sweet Hereafter (1997) - Some films are beautiful, some films are gloomy, but the combined sensibility of the depression following aftermath of a bus accident, and the signature style of director Atom Egoyan, makes 1997's The Sweet Hereafter a wonderful combination of both. The Sweet Hereafter is one of those films that is hard to get over. It is so real and raw, yet poignant that it stays with you long after its final frame goes black. It is sad, sweet, and even at times hard to watch, but it dives into human emotions and the true effects of a tragedy, like few films are bold enough to do. It also is chocked full of stunning performances Sarah Polley and Ian Holm, and Egoyan vision was rightly award with two Academy Award nominations for both his emotional screenplay, and his brilliant direction. This is a not a film for everyone, and some may be so overcome by it, that it may be one they can't finish, but if they can, they will be greatly rewarded. 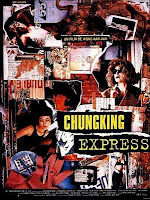 57. Chungking Express (1994) - In case you can't tell, I have now fully discovered the brilliant of Wong Kar-Wai, especially since he has now graced this list for the second time. And in with all of his great films that came out during this decade, Chungking Express is probably his crowning achievement. Like Days of Being Wild, Chungking Express is an intimate look into the human experience. In this film, Kar-Wai tells the story of two cops who are struggling with the emptiness of ending relationships. It has two diverging stories that somehow fit perfectly together in a melancholy and emotional film that while, at times, hard to watch, is also incredibly human. It is also stylistically beautiful with splashes of directorial flourishes and color palates, that in some films would be distracting, or taking away from an otherwise great story line, but in Chungking Express, the stylistic elements only help enhance the heartbreak that exudes from its beautiful frames.

56. The Sixth Sense (1999) - The career of M. Night Shyamalan, is probably one of the saddest and most disappointing scenes to witness in Hollywood in the last decade, because, while each film he makes gets worse and worse, we are constantly reminded that at one point, he was one of the hottest young directors with one of the most promising careers. In 1999, he was nominated for an Oscar for his modern thriller masterpiece, The Sixth Sense. On the surface it is a psychological ghost story, with lots of one liners, the most famous of which is of course, "I see dead people." But underneath that surface, which was used to bring people to the theater, there is a real sense of emotion, as a mother struggles with her son, and a psychologist struggles with his own fate. Shyamalan manages to find depths in an otherwise well-tread genre to explore the realities and fantasies that humans have about depth, in a way that has rarely been seen on film.

55. 12 Monkeys (1995) - I am a huge Terry Gilliam film, and while his 1995 sci-fi adventure 12 Monkeys may not be quite as memorable as its semi-thematic predecessor Brazil, it manages to cleverly expand on similar themes, and continues to show the talent and vision of one of the best modern directors. What I love about this film is the way that it doesn't quite fit into any specific category. It is one of those films with a timeless message about the future of our world, but manages to combine action, dark humor, romance, science-fiction, drama, and almost every other genre into its frames without feeling overstuffed. It is impeccably acted by Stowe, Pitt, Willis, and the entire cast, and remains one of those films that stays with you, and not just because it is slightly unsettling, but because it is incredibly well-made, and so perfectly situated by Gilliam and his crewed, that it simply deserves undeniable admiration.

54. A Taste of Cherry (1997) - Something about this past year's Certified Copy still sits with me slightly off, although upon a second viewing I would bump up my initial reviewing letter grade. But despite my lack of enthusiasm for his latest project, I have recently become a huge admirer of Abbas Kiarostami's films, and 1997's A Taste of Cherry is a beautiful representation of his enormous talent. Unlike Certified Copy, A Taste of Cherry has a level of emotion that feels so real, that it would never be compared to an exercise for a film class. The story about a man who plans to commit suicide, and continues to drive around until he finds someone who will bury him afterwards under a cherry tree might sound like a stretch, but it is a beautiful story about a journey of one man trying to find a real reason to live. It is a film that tests human emotion, and makes us look a little more closely at our own lives, and in many ways appreciate them so much more. It is beautifully directed, well-acted, and packs an emotional wallop that will stay will you for weeks.

53. Jackie Brown (1997) - In an unfortunate turn of events, Quentin Tarantino's 1997 film noir classic Jackie Brown has always seemed to be pushed to the bottom of the director's pile in favor of other films like Reservoir Dogs and Pulp Fiction. And while those who do the pushing may have a point, they also forget that Jackie Brown still remains one of the most inventive and entertaining films of Tarantino's repertoire, and of the 1990's. It was received initially with mixed reactions, but 15 years later, Jackie Brown needs to be reexamined. It may not be as stylish and noir as Pulp Fiction or as upfront as Dogs, but it is also slightly more mature than his previous efforts. It is a bit more traditional, which is not necessarily a bad thing, as it makes the story a little more easily translated, and allows for character development which is greatly appreciated and enhances the entertaining story line. Sure its no Pulp Fiction, but Jackie Brown is still one of the best films of the decade, and deserves recognition.

52. The Player (1992) - Before 2006's For Your Consideration made a lot of fun about the politics of winning an Oscar, Robert Altman's 1992 classic The Player, was avid moviegoers little joke, and while many people may not get the inside jokes for us cinephiles, it remains one of the most self-mocking, and incredibly hilarious films about film every made, and one of the most charming of the 1990's. Tim Robbin's infectious performance (much better than his Oscar winning one in Mystic River), leads an all-star cast, perfectly assembled like only Robert Altman can, to make fun of and make satire of the same industry of all they are all a part of. And only a director with as much finesse as Robert Altman could pull it off with deftness and class. Basically put, it is a great modern day follow-up reminiscent of other satirical works like Sunset Boulevard and A Star is Born. And that is one hell of a compliment.

51. Casino (1995) - Once again, like Jackie Brown before it, Casino is usually relegated as one of the lesser Scorsese efforts behind Raging Bull, Taxi Driver, and The Departed, and while it may not reach the cinematic heights of those efforts, it still remains an excellent film that is signature Scorsese and wildly entertaining. Featuring great performances from Joe Pesci, Robert DeNiro, and particularly Sharon Stone, Casino is a sprawling crime epic about the rise and fall of a gambling empire. It is  violent, visionary, and a fascinating story that will have you glued to the screen the entire time. Basically it showcases all of the qualities that have made Martin Scorsese one of the best directors of the last half century. His ability to combine stylistic film brilliance, with popular crime sensibility, is reminiscent of Coppola and other gangster classics, and also shows us all about how organized crime can be deceptive and powerfully depicted. A wonderfully underrated film that is worth a second look.
Posted by Andrew at 11:05 PM