Because American Horror Story is written as an anthology, with each successive season being different casts (although apparently Jessica Lange is returning, so that is tricky), it is in contention for not the Drama Series category, but instead the TV Movie/Miniseries category. This is an interesting twist of fate, but Jessica Lange (at least in my book), still remains at the top of the pack for Supporting Actress, no matter which category she is competing in. Like Downton Abbey before it, it could switch to Drama Series next season, but at this point Ryan Murphy, and his team have decided this is the best place to submit them. I still think it will have a hard time competing because of its genre label. But I will say it has a better shot in this race than it does in the incredibly packed Drama race, so its producers may have made a really smart decision. 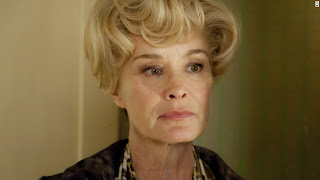