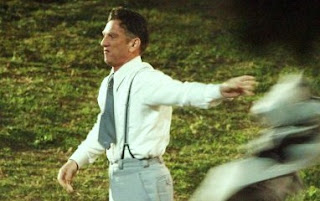 Commentary - As with Supporting Actress, there are a lot of big names with films this year, and so discerning which ones will make the cut this early on is as difficult as always. In some cases, like Lincoln, there are so many potentials in the cast list alone, it is hard to discern. I am personally going with David Strathairn early on, because the role of William Seward should be a meaty and important one, although Tommy Lee Jones (as Thaddeus Stevens), and Joseph Gordon-Levitt (as Robert Todd Lincoln), also look like baity roles in a Best Picture frontrunner. There are also a lot of names from Quentin Tarantino's Django Unchained, but my money is on Leonardo Dicaprio. He has yet to win an Oscar, and this might be teh Christoph Waltz-esque role that gets him his first (Ironically, Waltz is also a big contender as is Jackson for the film). Les Miserables has some big names, but Russell Crowe taking on a musical looks like something to be excited for, as does Sean Penn's take on a gangster. The final slot is going to someone, although controversial lately, is an incredible actor, Joaquin Phoenix, but he will face internal competition from Philip Seymour Hoffman. Also watch out for the Argo's crew, Macy, Hardy, Clooney, "Gatsby" crew, as well as others.
Posted by Andrew at 2:09 PM