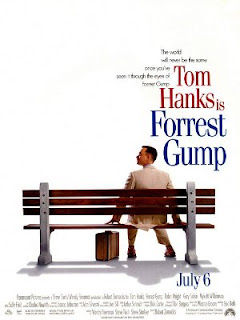 50. Forrest Gump (1994)- Some say this film is too schmaltzy, some say its too long, and even more say it is the most unrealistic look at the second half of the twentieth century ever put on the silver screen. But while haters were out there bashing it, it quickly became an American classic, that beautifully tells the story of one of the most inspirational characters in film history. Tom Hanks had already won an Oscar (the year before) when Forrest Gump was released, but it was this film that truly cemented his status as a bonafide movie star with talent, charisma, and the ability to transport an audience to a different time. But Hanks wasn't alone. Robert Zemeckis and Eric Roth craft a beautiful story, which was wonderfully shot, and makes us forget that the film is three hours long. Combine into that a hunk of emotion and humor, some wonderful supporting actors such as Sally Field, Gary Sinise, and Robin Wright, and Forrest Gump is an epic journey of love and life which has become forever cemented in film history as one of the greats.
49. The Silence of the Lambs (1991) - To this day, Hannibal Lecter remains one of the scariest and most vile villians that has ever graced the silver screen, and ironically in this iconic film, he is in a jail cell the whole time. This shows the endearing power of Anthony Hopkins' Oscar-winning performance that he could convey an unbelievable amount of fear simply through his stories. But Hopkins was not the only revelation in this modern horror classic, which cleaned up five Academy Awards including Best Picture. Jodie Foster was phenomenal, and Jonathan Demme's direction was clear, consise, and perfectly captured the mood and suspense, all the while allowing the cast to do its thing without interruptions. Another part that is often forgotten is Ted Levine who was sadistic and mean as Buffalo Bill and held his own ground against Hopkins. It takes a lot for the Academy to swoon over what is basically a horror film, which says a lot about the quality of this film.

48. Terms of Endearment (1983) - James L. Brooks is a master at comedy, but in 1983, his Academy Award winning film Terms of Endearment showed all of us, that not only could be make us laugh, but more importantly, could pull at our heartstrings and make us all bawl like a baby. The tender and emotional script, combined with Brooks minimalistic direction allowed the incredible cast to develop these well-drawn real human characters. Jack Nicholson is quiet and emotional, a side that is not often seen from him, but one that was welcomed. Debra Winger held her own against veterans, and was emotional and played a cancer-stricken mother with power and strength. But the real revelation here was Shirley MacLaine. She was funny at the right moments, and powerful and shockingly emotional at others, creating a perfect balance and a well-drawn character that showcases the fear and the strength that all mothers must go through when facing the death of their child.

47. Raiders of the Lost Ark (1981) - Indiana Jones is one of the most important and memorable characters in film history, and that is thanks to the creation of this professor with some ass-kicking abilities by none other than the legends themselves: Steven Spielberg and Harrison Ford. And while all of the Indiana Jones have been thrilling adventures, none have matched the soaring heights that were reached with the 1981 classic, Raiders of the Lost Ark. Action-adventure movies tend to be too heavy on thrills, and lacking on story and quality acting, but Raiders of the Lost Ark fortunately does not fall into that already too filled category. Instead it is a fast-paced adventure ride that fully develops its characters, features a winning performance from Ford and the entire cast, and it proved that Steven Spielberg was not simply a science-fiction nerd, but could make quality movies of many different genres. Plus it launched a film series which has become one of the most popular and celebrated of all time.

46. No Country For Old Men (2007) - This is the film that the Academy chose to finally honor the Coens with the awards glory they so richly deserve, even though it its their second best film (See below). Featuring zinging performances, beautiful direction, and a taut script, No Country For Old Men was a winning and thrilling cat and mouse game that kept the audience on the edge of their seats for the entire run time. Of course one of the true revelations here was the incredible Javier Bardem, whose Anton instantly became one of the most evil and fascinating villains in movie history. He was quiet, serene, and just when you least expect, deadly, a chilling profile for an unstoppable killer. However, the reason that the film worked was its simplicity. Yes it had broader metaphors layered underneath its exterior, but in terms of the action, the script, the storyline, there wasn't a lot of dialogue or fancy editing that shifted scenes wildly back and forth like most action films. Instead the Coens opted for a quiet yet tense film that never overstayed its welcome. A winning idea to say the least. 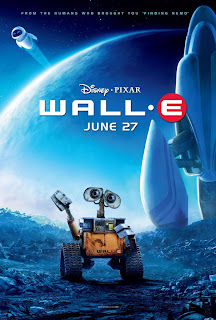 45. Wall-E (2008) - Silent movies were all the rage in the early days of film, then in 1927, The Jazz Singer revolutioned sound, and silent movies became a thing of the past. Then in 2008, the adventurous and visionary studio Pixar created another film which was almost silent (not quite but for a a good portion it was), about a tiny robot in a furturistic world. Despite a lack of much dialogue, Wall-E became not only an instant Pixar classic, but an instant classic period. It captivated audiences of all ages, engaged them with intelligence and wit, and also made a broader importnat statement about the human impact on the environment. Maybe the best part however, was how simple it was, how ingenous it was to push the boundaries of what people thought was possible in terms of film. Who would have thought that an almost silent movie would be popular in 2008? Apparently Pixar did, and we are all happier that they took the risk.

44. Fight Club (1999) - I like the new David Fincher, but I am happy he is tackling The Girl With the Dragon Tattoo, because it could be an opportunity for him to get back to his roots as a dark and twisted film director whose intensity is only matched by his talent. If you are looking for an example of what I am talking about, then look no further than his 1999 cult classic, Fight Club. When two guys (well sort of), decide to start an underground fight club in order to escape from the droll reality they live in, chaos ensues, and a world of sex, violence, and crime escalates to a stunning and shocking climax. Fincher definitely showcases his talent as a director, perfectly creating his two alter egos, capturing the dark mood, yet still moving at a quick enough pace to keep the movie going. Ed Norton and Brad Pitt, who share most of the screen time give electrifying performances, particularly Norton, who seems to have a knack for playing crazy. But beyond all that, Fight Club is today considered one of the greatest cult classics not because of good performances or excelled directing, but because it has a fervent fan base that recognized its genius before the rest of the world, and helped propel this movie to eternal life.

43. Judgment at Nuremberg (1961) - In the aftermath of World War II, the Nuremberg trials were some of the most intense acts of judicial process that had ever occured. And thanks to the talent of the great Stanley Kramer, these trials were brilliantly placed on the screen in the 1961 classic, Judgment at Nuremberg. Featuring the trials of four Nazi judges in the aftermath of the war, this film was probably one of the important and eye opening to come out in the 1960's. It is beautifully shot, incredibly intense, and more importantly displays the horrors (in some cases the actual footage), which allowed many viewers to not only go back to that horrific time, but see the mad men who carried out Hitler's orders get the judgment they deserved. But it is not simply a film of importance, it is also an incredible dramatic exercise featuring  turns from the likes of Spencer Tracy, Burt Lancaster, Judy Garland, Maximilian Schell, Marlene Dietrich, and Montgomery Clift, and a wildly entertaining and shocking story that made people think and reflect. A true feat indeed.

42. Brazil (1985) - Terry Gilliam is weird. There is really no other way to put it other than weird. His films are a blurry mix of reality and fantasy, making broader statements while wowing us with strange, yet vibrant visuals. And in 1985, Gilliam's Brazil showed how he was never been weirder, or better. Based in a retrofuture world, brilliantly shot in black and white for a contrast, Gilliam's story of bureaucratic revenge and an all-powerful state was an almost perfect vision of what George Orwell had predicted so many years ago. While not appreciated much upon its release, in hindsight, we can all look back and praise Gilliam for bending the mold, for being a visionary. It didn't hurt that he had Jonathan Pryce, Robert De Niro, Bob Hoskins, and others in his corner, all going along for the ride. But in the end this is Gilliam's baby, and his creation is one that will not soon be forgotten.

41. Fargo (1996)- I am still befuddled at the fact that the weepy overrated English Patient beat out this dark classic for Best Picture. Sure it is a little chaotic, and some of the hacked dialogue appears clunky, but that is exactly what the Coens had in mind. None of their films are perfectly laid out with smooth transitions and perfect endings. They are messy, the good guys are not that likeable and the bad guys are not that hated, and that is exactly what they had in mind. That is also why we love Fargo so much, because it is probably the most chaotic, the most insane, and definitely the best the Coens have ever offered their audiences. What I liked best about Fargo is just how funny it was. Layred underneath levels of darkness, murder, and crime, lies a comedy that takes a lot of attention and a lot careful digging to find hidden beneath its exterior. Thanks to the talents of Steve Buscemi, William H. Macy, and especially Frances McDormand, the Coens vision comes alive, and we can't thank them enough.
Posted by Andrew at 10:40 AM