Review: Don't Be Afraid of the Dark

In the opening scene of Guillermo Del Toro and Troy Nixey's Don't Be Afraid of the Dark, we are introduced to the lingering creatures at the mansion of a famous local artist, and their hunger for human bones and teeth, particularly those of children. It is a bone-chilling scene that sets the stage for the modern day, where a young girl Sally (Bailee Madison) comes to live with her father (Guy Pearce), and his girlfriend Kim (Katie Holmes), who have been renovating the mansion to make it look like the original. When they stumble upon the basement where the creatures had taken the artist, and previously his beloved son, the monsters that lie beneath began to go after Sally, a lonely, over-medicated girl, who doesn't feel welcome. By offering her friendship, the creatures lure her to open up the grate that keeps them down, therefore unleashing them back into the house after many years. Once Sally realizes these monsters are not really there to be her friend, she begans to warn her father, Kim, and other adults, none of whom believe her. As the film goes on, the creatures get feistier, and more in numbers, and began to result to tricks and attacks in order to capture Sally and fulfill their bloodthirsty hunger. 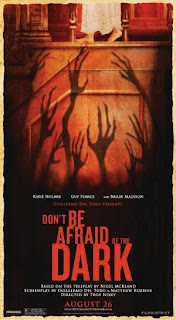 Don't Be Afraid of the Dark may have not been directed by Guillermo Del Toro, but his presence as screenwriter and producer are immensely felt throughout, particularly in terms of the incredibly creepy atmosphere, the references back to old stories of horror and mythology, the beautiful art direction and cinematography, and the reverence for its original source material (and 1973 television movie). However, while del Toro and Nixey may try there best, Don't Be Afraid of the Dark does not excited nor thrill as much as its predecessor, and while there are a few jumps and screams to be had, in the end it turns out simply not to be that scary.
There are however some nice elements, many of which are mentioned above. But there are others. Katie Holmes, Guy Pearce, and Bailee Madison all give solid performances that are neither too over the top, nor too understated, and the screenplay is definitely a lot better than 90% of the hackneyed horror films that grace us with their presence every year, although that is not saying much. And as mentioned, the technical aspects of this film are top notch.

But Don't Be Afraid of the Dark suffers from the fact that while it is not a bad movie, it is not a great horror. The creatures are revealed way to early, and then the fear of them quickly disappears. Furthermore, while it initially does well of avoiding horror pitfalls, it quickly starts to embrace some of the overplayed and cliche elements. And while the climax of the film definitely has the markings of a classic horror climax, its effects quickly wear off, and it simply doesn't have enough punch to really make a substantial statement.  Simply put, Don't Be Afraid of the Dark has all the right elements, but its execution of the thrills simply falls flat. The original was horrifying for those who saw it in the 1970's, the remake will not have the same effect.

Oscar Potential: Some of the technical elements are nice, but I really don't think it has any shot at all.
Posted by Andrew at 11:14 AM