When Meryl Streep won a Screen Actors Guild Award in 2008 for her role in Doubt, she prophetically exclaimed to the audience, "My God! Somebody give her a movie!" She was of course speaking about the magnificently talented Viola Davis. Well, three years later, Davis finally got her movie. And I think I speak for audiences everywhere when I say, it was worth the wait.

Set in 1961 in Jackson, Mississippi, a young college graduate named Skeeter (Emma Stone), defies her overbearing mother (Allison Janey) and gets a job at the Jackson Journal writing an advice column. After talking to a Harper & Row publisher in New York, as well as seeing the injustices that surround her, Skeeter seeks out the advice of a wise maid Aibileen (Viola Davis), who works for her friend Elizabeth (Ahna O' Reilly), and who Skeeter hopes will help her write a book about the maids in Jackson, and their point of views regarding the white folks they work for. Another maid Minny (Octavia Spencer) gets roped in after being fired by the neighborhood debutante, and Skeeter's childhood friend, Hilly Holbrook (Bryce Dallas Howard), and her senile mother (Sissy Spacek), and being hired by a social outcast Celia Foote (Jessica Chastain), who is married to Hilly's ex-boyfriend. When Hilly drafts an initiative to build a colored bathroom in each house, she comes into conflict with Skeeter, who is dealing with the loss of her own childhood maid Constantine (Cicely Tyson). When the book is published, especially with the awful, terrible thing that Minny did hidden within its pages, all hell breaks loose, and the fabric of a quiet, segregated town starts to change. 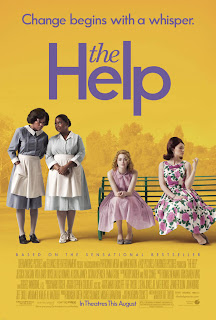 The Help is quite possibly one of the most inviting, entertaining, and emotional films of the year. Anchored by steady direction, a faithful adaptation of Kathryn Stockett's hit book, and an incredible cast, The Help is also one of the best films of the summer. Tate Taylor and Kathryn Stockett are good friends, and the respect that Taylor has for Stockett's work is on display throughout the entire film, as he has captured not only the story, but the heart and soul of her work to a tee.

However, the reason The Help was such a satisfying film experience is the wonderful and talented cast. The three leads, Emma Stone, Viola Davis, and Octavia Spencer carry the weight of the film, and Stone and Spencer's humor provides plenty of laughs. But the real revelation is Davis, who is steady, emotional, and simply stunning as Aibileen, and if there is any justice in this world, she will be nominated for an Academy Award. For that matter, Spencer and Stone should get looks from AMPAS as well. But they are not the only characters that provide depth and passion to this project. Bryce Dallas Howard is vicious as Hilly, and Jessica Chastain is simply perfect and perky as Celia Foote. Veterans Allison Janey and Sissy Spacek also add humor, and make their few scenes worth it, Janney playing a protective mother perfectly, and Spacek making the crowd roar with laughter every scene she is in.

But despite my praise, I could see how some people may not be the biggest fans of The Help, as it can be pat in moments, and its resolution, like the book's is far from clear. However, those critics who have bashed it as another white-people-saving-black-people kind of book, I think are sorely mistaken. As much as Skeeter helps put their views on paper, it is the maids that show the true courage, that stand up in a time of injustice, and who end up helping Skeeter as much as she helps them. The black female characters in this movie were so strong and so brave, that I find it hard to believe that some people are bashing their characters as stereotypes, or bashing the actors for supposedly belittiling black achievement by playing maids.

Criticisms and controversy aside, The Help overcomes any potential issues to become a truly winning film, that literally had the members of the audience cheering and rolling in the aisles with laughter. As I walked out of the theater I had this warm feeling of joy, mostly due to the talented cast and the passion that was put into this film. Simply put, I loved it, I was completely entertained, and I would recommend it to anyone who wants to take a break from loud sci-fi adventures or raunchy comedies, and simply wants to enjoy an empowering and wonderful film.