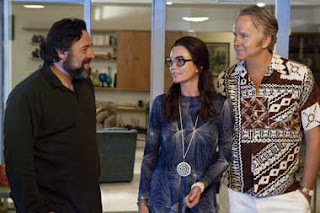 Commentary
For me, the biggest question mark in this category is The Kennedy's. Normally the names of Barry Pepper and Tom Wilkinson would put them automatically in the race. But the drama surrounding the series, and then the less than stellar reviews, means that their chances of getting in are slim. That being said, there are plenty of top contenders in what appears to be a stacked race. First, James Gandolfini and Tim Robbins both got great reviews for Cinema Verite, and I can't see a scenario where they both don't get in. The two Mildred Pierce guys, Guy Pearce and Brian F. O'Byrne (my personal favorite of the bunch), should also get in, unless something strange happens. That means that there are only a few spots left for some other contenders, and lots of names worth mentioning. Pillars of the Earth has a few top contenders, namely Donald Sutherland, but my guess is that they are left out. Instead, probably two of the four guys from Too Big to Fail get in instead, maybe Giamatii and Woods being the better bets, although it would be incredible to see Billy Crudup get some attention, as he is one of the best and underrated actors in the game today.
Posted by Andrew at 12:29 PM