5. Toy Story (1995) - Every once in a while a film comes along that changes the game completely. After reviving themselves in the ten years before Toy Story, Disney, combined with the newly computer-generated company Pixar simply broke the mold with this stunningly animated and incredibly moving tale about a boy and his toys. The story was simple, an old-school toy faces the threat of the new fangled space toy, and together they must face the challenges in front of them to be loyal to the boy that cherishes their companionship. It is a heartbreaking, funny, and moving film that completely redefined animation, made it a player on the big game equal to its live-action counterparts, and started a storied tradition of film excellence by one of the most successful film studios of the last twenty years. On a film level, it is a beautifully written, beautifully voiced, and beautifully rendered film that appeals to kids of all ages, 4-100. But on a greater level, Toy Story remains one of the greatest film of the 1990's, because of the legacy it created, the era of animation that it brought on, and the continued promise of its premise, that a toy is not just a child's plaything, it is something that we all cling to for fun and answers when the world gets tough. It that's not a game changer, I don't know what is.

4. Saving Private Ryan (1998) - I just recently saw Lincoln, and it is Spielberg's best film since this 1998 World War II classic, which still is raved about by WWII veterans who say that Spielberg presented the most realistic depiction of the invasion of D-Day ever seen on the silver screen. But that is just the first part of this film, and while it is the most talked about, it is only a small part of what makes Saving Private RYan such a great film. The rest shows a dedicated army unit braving the war-torn European countryside to find the third son for a grieving mother who has lost her other two. Spielberg manages to make both a beautifully shot, yet harrowing and suspenseful war epic, as well as a quiet and important movie that dissects the relationships that form between soldiers, the lengths they will go to save one of their own, and the bravery and heroism they display while fighting for their country. It is not only a well-acted, well-written, well-directed, and simply well-made film, it is also one of the most important films released in the 1990's. It finally gave us the most realisitic look at the most importnat and defining period in our history. And, as in all of his historical films, Spielberg's attention to detail and passion is evident, and exudes from every frame, turning this into something above the mundane, something extraordinary.

3. Goodfellas (1990) - The 1990's were not the best period for Martin Scorsese in terms of his films, but amongst some of his weaker efforts, lies one of his best and most dynamic films of his long storied career. Since the Godfather films of the 1970's and Scorsese's Mean Streets (excluding Part III which had premeired the year before Goodfellas), no one had been able to capture the mood and essence of gangster films. That was, until 1991, when one of the best directors working today took on the subject and nailed it. While Goodfellas may still lag behind the first two Godfathers (most films do for that matter), It succeeded in reviving the genre and bringing it to a new generation. It also proved that Scorsese had a knack for long gangster epics, making them incredibly gritty and violent, while also having a sheen of mainstream magic. It perfectly captures the rise and fall of a man who started young, and eventually saw his life crumbling around him. Scorsese also manages to blend in long-term characterizations, family life, and some humor the way Coppola did, which makes this a much deeper film and gives life and meaning as to why the mob does what it does. Goodfellas will always be remembered as a gangster classic, but because of the wonderful cast, and Scorsese's keen directing vision, it will also be remembered as one of the best, period.

2. Schindler's List (1993) - Well apparently, this weekend is Spielberg-palooza here at The Awards Psychic. Of course there is a very good reason for this, and that is that within his lifetime, he has created some of the most lasting films, and film images in American culture. Of his major contributions to the American historical dialogue, none have been more lasting and impressionable than his 1993 concentration camp classic Schindler's List which remains today one of the greatest films ever made period. It's black and white noir style enhances its image and power, but it is the story itself, along with some endearing performances, that make this film the classic that it is. It is one of the most emotionally harrowing films to watch, its insistence on bleakness and reality may turn away some viewers, but it is what gives the film its power and substance. Like Saving Private Ryan, Spielberg understands the weight of his material, and treats it with care and passion, that still retains the importance and historical heft of the Holocaust, while also turning it into a visual Hollywood masterpiece that engages. Also like Saving Private Ryan, Schindler's List remains one of the most important films of the 1990's, one that should be seen and absorbed by all, to get a truly haunting and substantial image of one of the most horrific genocides of all time.

1. Pulp Fiction (1994) - I have said so much about Pulp Fiction that I will not bore you again with another rambling diatribe about its greatness. It is pulpy, myterious, bloody, ridiculous, funny, and simply put, one of the most entertaining and original films of all time, cementing the unique and wild style of Quentin Tarantino as one to watch. So in the end, the 1990's turned out to be one of the best decades for film, particularly after the 1980's which simply doesn't compare to the ones sandwiching it. And at the of the pile is Tarantino's masterpiece, the best film of the 1990's, Pulp Fiction. 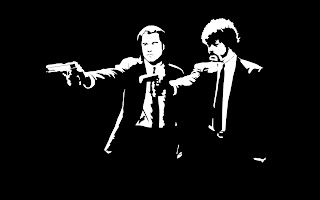