Something occured to me as I was sitting in the theater watching Lincoln unfold before me: Steven Spielberg, after decades of films, continues to grow as a filmmaker, and never in his history has he made a film quite like Lincoln. Sure he has tackled heavy historical issues in films like Schindler's List, War Horse, Munich, and Saving Private Ryan, all Best Picture nominees in their respective years. But Lincoln is something that has broke the mold for Spielberg, and could turn around his film trajectory from now on. This is not another epic historical drama. Instead, Lincoln is a quiet, talky, introspective film about one of the most unassuming and brilliant men to ever hold the highest office in the land. It is wonky, focusing on the internal politics of the White House and its relationship with Congress. It focues on the bribery, the arm-twisting, and the ideals behind probably the most important piece of legislation passed in the 19th century. But while it is so different and so un-Spielberg-like, I am also happy to say that Lincoln is absolutely brilliant, and one of the best films of the year, and Spielberg's best in a long time. 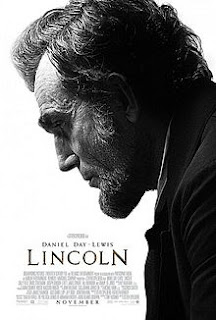 Starting in January of 1865, Lincoln (Daniel-Day Lewis) tells the story of how the president, by the urging of Secretary of State William Seward hires a band of ear-bending roughnecks (brilliantly portrayed by James Spader, John Hawkes, and Tim Blake Nelson) start to persuade Democratic congressmen to change their votes on the 13th Amendment, which has been stalled in the House of Representatives. Throughout this journey to pass it, we see Lincoln come to terms with the Radical wing of his party (led by Tommy Lee Jones as Thaddeus Stevens), as well as compromise with the conservatives (Led by Hal Holbrook as Preston Blair). We also see how he spent his last months in office, his tangled relationship with his wife (Sally Field) and his son (Joseph Gordon-Levitt), how the war affected him, and how he used his extreme wit and surprising political saavy to pull all of it off before his untimely death.

In every way possible, Lincoln is one of those films that simply fires on all cylinders. It is a technical achievement, with great pacing thanks to Michael Kahn's editing, beautifully shot by Janusz Kaminiski despite its mostly interior shots, and wonderfully scored by John Williams, who actually is sparingly used which not only makes his work more appreciated, but enhances the script and oratory of the actors. But what most people will remember is the incredible cast. Sally Field, David Strathairn, Tommy Lee Jones, and Hal Holbrook are the biggest supporting characters, and all handle their job with passion and careful study, which makes all of them Oscar contenders. But the character actors that fill the screen add so much depth, each one breathing life into every part no matter the size. John Hawkes, James Spader, Lee Pace, Tim Blake Nelson, Joseph Gordon-Levitt, Jared Harris, S. Epatha Merkerson, Joseph Cross, Peter McRobbie, Gulliver McGrath, Gloria Reuben, Bruce McGill, and Jackie Earle Haley are just a smattering of the names of talented actors who lend their voices to this sprawling, yet controlled and wonderfully contributory cast. Then of course, there is Daniel Day-Lewis. There are no great words to describe just how incredible he is as Lincoln. I will say though that he is actually quite surprising. This is not some over-the-top performance where the actor tries to steal every scene. Day-Lewis is quiet, he is funny, he is unassuming, perfectly capturing what we know about Lincoln, and he still manages to steal every scene whether he tries to or not. If he doesn't win an Oscar for this, something is wrong with the world.

But in the end, I am still most surprised by Spielberg. He was given an incredible script by Tony Kushner, who brings a theatrical element that helps pull it off. But this is Spielberg's baby and you can tell. The careful attention to detail, the passion that exudes from every frame shows the audience just how much he cared about this project, why he took so long to get it to us, and I definitely think it was worth the wait. More importantly, Spielberg continues to show how masterful he is as a director, and how diverse and flexible he is as a director. I am entirely convinced that there is no type of movie that he can't pull off, and Lincoln is proof he continues to mature and diversify his resume.

Lincoln is a masterful, talky, funny, and brilliant look at the inside politics of the passage of the 13th Amendment. It is also going to be huge Oscar bait, most likely hitting across the board with a buttload of nominations, all of which are deserved. I do wonder whether it will play well enough to overcome the likes of Argo and Silver Linings Playbook and actually pull off a Best Picture win. The box office count at the of the weekend will indicate how the public received it, and in the coming weeks, the critics groups will sound off. I kind of get the feeling though that this will be bigger than people are assuming and could be the frontrunner come year's end. I guess we'll just have to wait and see.