I had the unfortunate displeasure of sitting through two of the most miserable hours I have ever spent in a movie theatre, when I was forced to go with a couple of friends to see Zach Snyder's lastest stinker Sucker Punch. 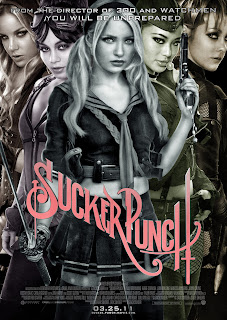 When Baby Doll's mother's dies, she is vengefully framed by her stepfather for the murder of her young sister (I want to make a note that this all takes place in like ten minutes), and is sent to an insane asylum for female prsioner's. There Baby undergoes psychological treatment from a Polish psychiatrist, but is scheduled to undergo a procedure to eliminate her memory, after her stepfather paid off a prison guard. The film goes into a subconscious within a subconcious as Baby Doll views the prison as a strip joint, where the many incredibly sexy girls dance for the many clients of the prison guard/pimp. Then when you least expect it, as Baby Doll begins to dance, she slips into a fantasy world, where she must detroy the monsters that are thrown at her in order to obtain the real life objects she needs in order to plan her escape before the inevitable happens. When she gets the other girls involved, they began to kick ass in their various levels of subconscious in order to get their items, and ultimately their freedom.
Sucker Punch tries to be like Inception, except where Inception exceeded expectations, Sucker Punch fails to hit any right notes throughout most of the film. Despite all of the action, I was completely bored throughout the entire film, and Emily Browning, Vanessa Hudgens, and Jena Malone, all young talents fail to make any mark in terms of acting ability, and Browning in the lead stares blankly at the screen. Furthermore, where the various levels of Inception work, the screenwriters of Sucker Punch have 1/3 of the talent of Christopher Nolan, and simply cannot handle the muti-layered story, or deliver any dialogue that isn't tired, worn out, or just plain lame.
The only redeeming qualities of Sucker Punch are Abbie Cornish and the special effects. As in all Zach Snyder films the visual effects are always up to par, although sometimes, its a little too much. Besides the effects, the only actor in the entire film that even remotely tries is the wonderful Abbie Cornish, who isn't even that great, which is a crock, because she was fantastic in Bright Star. Seriously, I still have yet to figure out why she would lower herself to such slop.
Sucker Punch is neither exciting nor sexy, and is just plain trash, whose few redeeming qualities are not enough to make up for its many many many many flaws. My suggestion is that you take the time to go see something else. Tomorrow, I will be seeing Certified Copy, in the hopes that it will restore my faith in the craft of cinema.
Grade: D-
Posted by Andrew at 11:27 PM