Commentary - I actually liked Crash, and although I was shocked it won Best Picture, I wasn't all up in arms over its victory, just more surprised than anything else. That being said, I still would have voted for the epic western love story Brokeback Mountain, simply because in terms of acutal filmmaking, it was the best of the year. 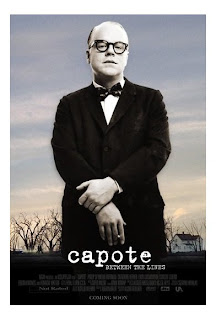 Best Actor
Academy Winner/My Pick - Philip Seymour Hoffman "Capote"
Commentary - I knew that Hoffman was talented, but I never thought in a million years that such a laid back, gruff guy could play someone so eccentric as Truman Capote. But damn did he pull it off, and gave us one of the best film performances of the last decade.

Best Actress
Academy Winner - Reese Witherspoon "Walk the Line"
My Pick - Felicity Huffman "Transamerica"
Commentary - This was a tough race for me, because I really do love Reese Witherspoon, and am thrilled that she won. However, I think I would have gone with the transformative performance of Felicity Huffman, who shocked and awed me with her charaterization and jaw-dropping role.

Commentary - Clooney was much better in Michael Clayton and Up in the Air then the bloated Syriana. So instead I would have gone with Giamatti. Not only did he do a great job, but it helped make up for his huge snub for Sideways the year before.
Best Supporting Actress
Academy Winner - Rachel Weisz "The Constant Gardener"
My Pick - Michelle Williams "Brokeback Mountain"
Commentary - This was another tough category, because Weisz was brilliant in The Constant Gardener. But the devastation and emotion that Michelle Williams brought to Brokeback Mountain was too incredible for me to ignore.

Best Animated Feature
Academy Winner - Wallace & Gromit: The Curse of the Were Rabbit

My Pick - Tim Burton's Corpse Bride
Commentary - I think that if I had picked this category, I actually would have gone for the darker Corpse Bride over the funnier Wallace & Gromit. It is hard to say exactly why, other than saying that I just personally preferred Tim Burton's piece.

Best Adapted Screenplay
Academy Winner/My Pick - Larry McMurtry and Diana Ossana "Brokeback Mountain"
Commentary - A well translated movie that was emotion, romantic, hit all the right notes, and managed to avoid annoying cliches, gay puns, or too much politics. A feat to say the least.

Commentary - I was impressed that Haggis and Moresco were able to weave their web of characters in the short time that they were given, but I most likely would have voted for the hilarious, yet deep dramedy The Squid and the Whale, one of the most underrated movies of 2005.
Best Foreign Language Film
Academy Winner - Tsotsi
My Pick - Paradise Now
Commentary - Both are great movies, but the realism that was brought to Paradise Now, and the importance of its topic (Israel/Palestine conflict) proved to be the tie-breaker for the vote.

Best Documentary Feature
Academy Winner/My Pick - March of the Penguins
Commentary - I truly enjoyed this fluffy movie about the migration of penguins. It was touching, informational, and had Morgan Freeman's voice. Check, Check, and Check.
Posted by Andrew at 8:35 PM