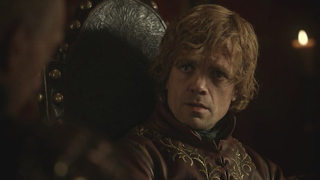 Commentary - This, along with its counterpart, will prove to be some of the most interesting categories at this year's Emmys. Last year's winner Peter Dinklage returns to the race, but this year he faces some stiff competition. Previous winner Aaron Paul returns for Breaking Bad, and could take home another Emmy, unless his co-star Giancarlo Esposito has anything to say about it. Perennial loser John Slattery also enters the race, but his episode submission last year was pitch perfect, so if he couldn't win there, I don't know if he ever will. Walton Goggins was a surprise, but well-deserved, nominee last year, but he will face stiff internal competition from Neal McDonough. Mandy Patinkin is a sure-fire nominee, especially if Homeland is as big of a hit with the Television Academy as I think it will be. The Good Wife boys return this year, but once again, with such stiff competition, their spots in the race are not certain at all. Damages is a curious case this year, with its long-awaited return on Direct TV. If Emmy lovers are still enthralled in the populer John Goodman's name will be hard to pass. So will the names of Dennis Farina and Nick Nolte, if people are not turned off by the PETA-cancelled HBO show Luck. There are a lot of outside contenders beyond these names, that may be sorted through in the months to come. The one to continue to look out for is Andre Braugher. No one expected him to be nominated for the first season of Men of a Certain Age, and then he was nominated two years in a row. Although the show was cancelled, and has not been on for awhile, never underestimate the power of Braugher. And yes, I realize that that rhymes.
Posted by Andrew at 8:37 PM