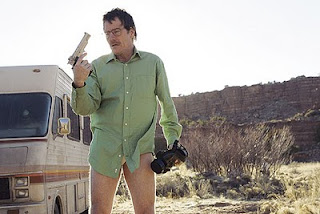 Commentary - Can anybody beat Bryan Cranston? When he wasn't eligible last year, I thought that Jon Hamm was finally going to snag a win, but then sentimentality ruled the day, and Kyle Chandler got a surprising, albeit deserving win. So now that Cranston is back it is once again him vs. Hamm, and I think that Hamm will have to wait around again for that Emmy. Beyond those two, there are some other fairly strong contenders. Steve Buscemi returns for Boardwalk Empire, fresh off another SAG Ensemble win, meaning it has actor's support. Three of last year's nominees are also returning: Michael C. Hall, Hugh Laurie for the last season of House, and Timothy Olyphant, but with a slew of new contenders, none of their spots are safe, and there is a good chance that none of them return. Of the newcomers, Damian Lewis might be the most competitive for his meaty role in Homeland. But television and Emmy favorite Kelsey Grammer playing bad in Boss and legend Dustin Hoffman are not far behind, although in Hoffman's case, the controversial cancelling of his show Luck may work against him. The other newcomer to this particular race is Hugh Bonneville, but since he failed to get a Movie/Mini nomination last year, I don't think he can get in here, but hey, anything is possible. Beyond those names, the list of possibilities is long, but not much chance, with the exception of Kiefer Sutherland, because he is well, Kiefer Sutherland.
Posted by Andrew at 7:24 PM