Based on the real story of Will Reiser's battle with cancer, 50/50 finds Adam (Joseph Gordon-Levitt), discovering he has a spinal tumor with an incredibly long name (which I will not even bother trying to write down), after finally seeing a doctor about chronic back pain. He is sent to see a perky, young therapist (Anna Kendrick), who is new on the job, and while trying to counsel Adam on his various stages of grief, is in the learning process herself as she is getting her doctorate. Adam is surrounded by his crude, sex-crazed best friend (Seth Rogen - who is real life friends with Reiser), his hestitating girlfriend (Bryce Dallas-Howard), and his overbearing mother (Angelica Huston), who in their own ways both help and hinder Adam's journey through the pain and aggravation of a debilitating disease.

When we think of great "cancer" or "sickness" movies, such as Steel Magnolias or Terms of Endearment, we remember mostly how they balanced both comedy and drama, so that it never got too melodramatic, but was never too funny as to be disrespectful. Like its predecessors, 50/50 is a perfect blend of crude comedic moments with dramatic cancer-related ones, thanks in no small part to the wonderfully personal and sharp script from Reiser, who clearly is able to expose not only his pain, but also have a laugh. Furthermore, fine direction from Jonathan Levine (his best film to date), and craft editing work, never let this film linger or get too depressing, which is probably why it was such an entertaining experience. 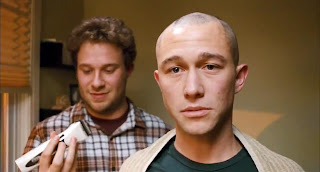 However, the real star here is Joseph Gordon-Levitt, who brilliantly portrays the various stages of grief, and is quickly turning into one of the finest young actors working in Hollywood. But he wasn't alone in this film. Seth Rogen usually annoys the hell out of me, but his few moments of tenderness, really round out his character, and his complete lack of barriers make him the comedic relief that is necessary to sustain the audience's interest. You can really tell that this is a personal story for him, and it's nice to see he has range.

Now while the male characters all get their due, I can't say the same about the female ones. But given their more limited screentime, all do wonders with their characters, Angelica Huston playing the perfect overbearing, worrying mom, and Bryce Dallas Howard being an out-right bitch, but this time with many redeeming qualities (unlike Hilly Holbrook). Of particular interest here though is Anna Kendrick, who once again proves that her quick-witted perky acting style works, and she plays Katherine like I imagine all new therapists truly are. It turns out her Up in the Air performance wasn't a fluke.

In the end, 50/50 is a warm and inviting dramedy featuring stellar performances, and the perfect mix of sickness, humor, love, and healing. Definitely one of the best of the year so far!