NYFF: My Week With Marilyn Reviews

Well, as expected, the cast of My Week With Marilyn, is apparently very good, the standouts being of course Michelle Williams and Kenneth Branagh, which was also expected. Particularly the praise is being heaped on Williams for avoiding mimicry, and creating a full-fleshed version of Marilyn, apparently stealing the show. Apparently, Eddie Redmayne also holds his own against Williams, and brings a warmth to the screen. All of that being said though, the overall reaction to the film has been mixed to negative to say the least. People love the cast, but many are comparing the film to a Lifetime movie: stylish, big stars, great productions values, and most importantly, hollow. Here is a snippet of some of the reviews we have seen thus far.

"Taking no chances, unlike its star, "Marilyn" complacently coasts on Williams' bravura perf amid mostly stodgy showbiz re-creations, but awards buzz and ever-reliable Anglophilia could spell solid B.O. returns for the Weinstein Co....[But Williams] The genius of the performance lies in the way Williams stresses the interconnectedness of these personalities: The neediness fuels the impudence, the vulnerability turns sexually provocative, and the little girl and sexpot together drive the screen role." 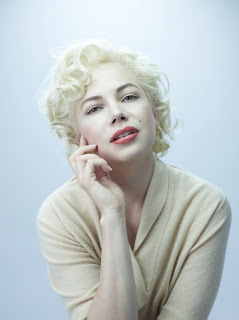 "Most of the time, especially in her own solo renditions of “When Love Goes Wrong (Nothing Goes Right)” and “That Old Black Magic” (the two songs bookend the film), with nothing and no one around her, she gets it right, while at other times, especially in scenes of the film within the film, she wanders off the mark."
Eric Kohn of Indiewire, thinks the role is lacking, no thanks to the script:
"But the script lands only the most basic laughs, failing to dig into the mystique surrounding its subject. While the movie goes through conventional motions, Williams has little to do save for offering her best Marilyn voice and grin."
Cole Smithey boldly states:
"Michelle Williams gives an Oscar-worthy performance as Marilyn Monroe in director Simon Curtis's thoughtful adaptation of diaries by Colin Clark."
I think that Williams, and Branagh (potentially Redmayne and Dench), are going to be in the Oscar discussion, especially with the Weinsteins behind them. However, the film is going to need better reviews to really make a mark, and is going to need a huge push to overcome some of it apparently glaring flaws. Like the rest of the season has played out, we'll simply have to wait and see.
Posted by Andrew at 3:41 PM