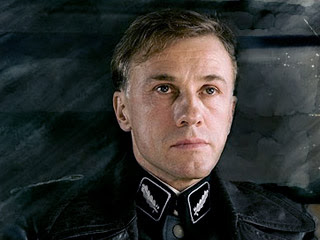 Best Supporting Actor
This race is starting to sew up as well, but there are still a few carrots dangling out there. In most people's opinion, including mine, this race has only one real lock: Christoph Waltz. He has been racking up critics awards, and IB has seen its stock rise, and may even contend for Best Picture, a nomination almost a lock at this point. From that point, the race is still wide open. Woody Harrelson has gained momentum for The Messenger in an expodential way, and he's a industry veteran whose had a big year, he's in. Despite the poor reviews for The Lovely Bones, Stanley Tucci got a SAG and a Golden Globe nod, so I think he's in. Plus, he also had a great performance in Julie & Julia, so its a double whammy. The last two spots get tricky for me. I think the legendary Christopher Plummer will finally get the recognition he deserves, and he's gotten a SAG/GG nod, so he's got the support. Then there is one spot. Christian McKay got a BFCA nod for Me and Orson Welles, but the Globe and SAG snub hurts his chances. Aflred Molina was a shoo-in about a month ago, but the same missing links as McKay have the same negative effect. While he doesn't really deserve a nod for this performance, I think they will give him this nod for Invictus and The Informant! Of course I'm talking about Matt Damon. Despite the subtleness of his performance, he keeps racking up nods, and he's never won for acting. TO Recap:
Matt Damon "Invictus"
Woody Harrelson "The Messenger"
Christopher Plummer "The Last Station"
Stanley Tucci "The Lovely Bones"
Christoph Waltz "Inglourious Basterds"
Posted by Andrew at 1:49 PM