Considering his age, this is not a shocking announcement, but it surely is a sad one. Eight-time Oscar nominee, and true film legend Peter O'Toole died yesterday after a battle with an apparently long illness. O'Toole was apparently a hell-raising, hard-drinking, one of a kind personality in his younger years, and wise auteur his in latter days. His screen performances showed him to be a talented, surprising, and always dedicated actor, and it is truly a shame that the Academy didn't find at least one time to give him the gold statute, although an honorary Oscar did roll his way in 2003. He was truly one of a kind, and one of the greatest screen legends of all time. My thoughts and prayers are with his family and friends right now as they mourn his loss, and in honor of his passing, I think we should all start re-watching some of his classics, a perfect way to tribute such an influential and timeless artist. Rest in peace old friend. 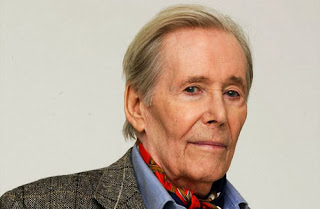