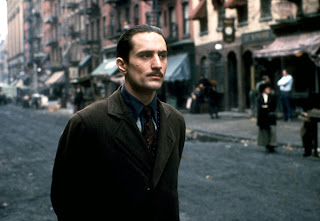 Commentary - It is hard to fill the shoes of any actor when assuming a character that has already been performed impeccably. But to fill the shoes of Marlon Brando seems like a task that should never be undertaken. Well Robert De Niro bravely took on the task. Not only did he nail it, but it would launch what has been one of the most storied careers in Hollywood. A stunning achievement indeed.
Posted by Andrew at 5:15 PM