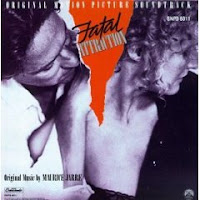 20. Fatal Attraction - This one might shock some people, as its overall reviews and audience reaction weren't exactly stellar, especially compared to the rest of the movies in the top 25. The reason that I love this movie so much is two fold. First of all Michael Douglas and Glenn Close give us some of the best performances of any actors on this entire list. It doesn't hurt that there are some fine performances from its supporting cast as well. The second reason, is that unlike most suspense thrillers, Fatal Attraction isn't just fluff. It is a deep look into the relationships between adults, and the issues that are faced by those who are psyhologically sick. This deft combination of suspense and depth makes this one worth revisiting.

19. Full Metal Jacket - Kubrick missed the cut for most of his movies on this list because of their release date. So I was thrilled when I realized that one of his best classics had a shot to make the list. Below you can see another Vietnam classic Platoon, and this one is just as exciting and has the same emotional impact. Simply put, Full Metal Jacket is one of the greatest war movies ever made. Its keen look inside the minds of those that defend our country may shock some, and make others feel ashamed. But for most of us, this pragmatic movie, which breaks the Kubrick science fiction mold, lets us know that even heroes have problems, and that even heroes are humans, something we need to be reminded of every once and awhile.

18. The Silence of the Lambs - Not since Hitchcock and The Exorcist, has a movie not only been suspenseful and scary as hell, but also fantastically made and an Oscar contender, in this case, an Oscar winner. Unlike most horror movies today, this one doesn't rely on cheap gimmicks or unnecessary gore. Instead it relies on old fashion suspense techniques, deep psychological study, and incredible performances to both entice us and make us think. Jodie Foster and Sir. Anthony Hopkins are fantastic individually, but together, their chemistry and intense acting abilities are what make this Best Picture winner soar. All those young horror movies need to not look at the crap that is usually released, and instead look to this modern horror masterpiece.

17. Wall-E - Only Pixar could create an almost silent film about two robots in a futuristic world that fall in love with each other, and make it work. Not only did it work, but it soared. It was funny, poignant, and managed to make an environmental message without being too preachy, something that James Cameron should take note at. The thing about Wall-E though that made it so special, and made it soar even above its Pixar counterparts was how it stays with you long after you leave the theater. To me, it did a better job of leaving an emotional impact than 90% of the live action movies released in the last 25 years, and if that isn't worth recognition, I don't what is.

16. Platoon - In case you can't tell, I have a weak spot in my heart for Oliver Stone movies. Maybe it is because I am a bleeding-heart liberal, or maybe, just maybe it is because he has a knack for making incredible movies, and Platoon is not exception. When a young soldier faces the horrors of war, he begans to question the purpose of the fight and more importantly, the morality of man. Not only was the movie well written, shot well, and featured some great performances from Charlie Sheen, and the plethora of other actors, but it speaks well particularly in today's world. As we see ourselves continue in various conflicts across the globe, it is the message of this movie that sticks with us, and makes us question the values of mankind and peace.

15. Apollo 13 - Houston, we have a problem. That line has become so engrained in our culture, so overused in other films, so synonymous with movie greatness that we sometimes forget its source. Ron Howard's Apollo 13 was a maginificent epic that combined suspense with the American fascination with the world beyond ours, and more importantly the heroism that we associate with NASA and astronauts. It was incredibly well acted, especially by Tom Hanks and Ed Harris, and was a well polished feel good movie that excited and moved audiences across country. That is not to say that it was hokey or commerical fluff. Instead it was a tense and inspirational epic that may be one of the best...period.

14. Brazil - I think that Terry Gilliam is one of the most underappreciated and misunderstood directors of all time, and in 1985, he reached (in my opinion) one of the highest pinnacles of movie greatness seen in the last quarter century. Brazil was the 1984 of movies. The story of a bureaucrat who becomes the enemy of the state, sounds like classic treason or whistleblower tale. But combine a retro-futuristic world and the sounds of 1984 and Brave New World are alive and well. It doesn’t hurt that Gilliam was able to snag Robert DeNiro, but this is Gilliam’s baby, and he shows his signature style of weirdness, creativity, and imagination that really makes this movie come alive. 13. Fight Club - David Fincher has now become a director that is known by name to the general public thanks to more high-profile projects like The Curious Case of Benjamin Button and his highly anticipated The Social Network. However, before he was a household name, he created what has become one of the biggest underground hits of all time, the illustrious Fight Club. The story of an underground fighting group that ends up terrorizing a city with its antics sure was an interesting premise for a storyline. But the real shocker came when we discovered the fact that Edward Norton was schizophrenic, and that Tyler (Brad Pitt) was only a figment of his imagination. Built on that crazy premise Fight Club is one of the most intense and compelling movies released in the last 25 years, and one that sticks with you long after each viewing.

12. Beauty and the Beast - It is a tale as old as time. But in 1990, we saw the rebirth of Disney come into full swing as this magical tale came to life in a way that had never been done before, and has yet to be matched. Combining stunning visuals, a thrilling and soul-stirring story, and vibrant music, Beauty and the Beast soars to the top of the animation pack, and became the first animated film to ever get nominated for Best Picture. What Beauty and the Beast really represents however, is just how excellent animation can be, that whether it is live action or not, that a universal story, combined with great filmmaking can truly make a tale of love a story that stands the test of time.

11. Aliens - Sometimes, when a series changes directors the vision and quality can drop significantly. Well The Alien saga is one that not only breaks that stereotype, but blows it out of the water. James Cameron continued where Ridley Scott left off, as our heroine Ellen returns back to colonized planet after they have lost contact. The only survivor is a young girl, and with her help, and the help of some kick-ass marines, Ellen revenges the Nostromo and using some bad-ass weaponry goes to war with the blood-thirsty aliens. This movie was simply bad-ass, Sigourney Weaver killing shit, amazing. Jim Cameron may have a lot of faults, but making great sequels is one area that he deserves praise. Pure sci-fi heaven.
Posted by Andrew at 3:00 PM